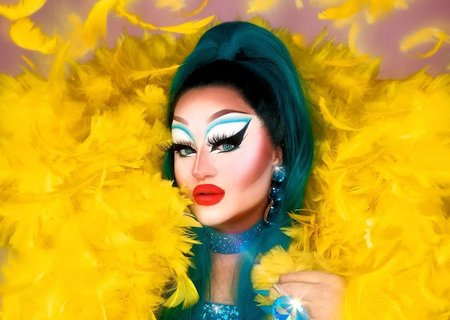 Join Victoria Scone with Shahbaaz from Trans Aid Cymru for a deep dive into being the first cis woman on Drag Race, being a celesbian and her path into the drag world.

Drag Race UK Series 3’s Victoria Scone made history being the first cis-gendered woman to compete on the show. She was immediately a fan-favourite and gained a rapidly growing following. Victoria has travelled the UK on various tours, including her most recent one-woman show JAM PACKED, which played to sell-out venues in major cities.

In 2018 Victoria made it to the grand-final of Drag Idol UK and since then has stormed the UK cabaret scene performing up and down the country. As a cis gendered female Drag Queen she has worked with a plethora of both traditional and alternative drag performers.

We can’t wait to see her on stage at the Norwegian Church!